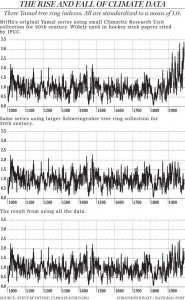 It seems that so called scientists at the Climatic Research Unit (CRU) and other institutions might be finally willing to properly respond to Freedom Of Information (FOI) requests. Not surprising, now that the genie is out of the bottle and it is going to be increasingly more criminal to claim that data related to FOI requests doesn’t exist or can’t be released due to some excuse.

No wonder the “warmers” — to give them a name, as “scientist” clearly fails to describe what they are — were manipulating data, as their precious models don’t match actual observations unless data is discarded, ignored and manipulated.

Special appreciation for bringing this matter forward goes to Mr. David Holland, who has for years taken on the warmers, the inconsistencies in their published data, and their so called conclusions.1

It will be interesting to see how the new — hopefully more accurate and complete — data impacts the predictions. Perhaps it’s time to get ready for that next ice age, as predicted in the 1970’s by the then-coolers-now-warmers…