Islam Is... no query suggestions shown 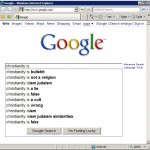 Christianity Is... many query suggestions shown

One has to wonder who still buys the tagline from Google to not be evil?

It’s not too long ago that Google participated in censorship of the Internet for the Chinese government1, so that the Communist leadership would accept Google. It seems that the Chinese keep Google on a relatively short leash, reminding them sometimes who’s the boss.2

Now it seems that an entire religion has hijacked Google, or Google is kowtowing to one. If one were to type “Christianity is“, “Scientology is“, “Judaism is” and many other terms followed by “is” into the Google search field, many query suggestions will be shown before the user hits the enter key, some offensive3, but reflective of common queries and search results.

However, if the typed term happens to be “islam is“, there will be absolutely no query suggestions presented. This is not normal behavior, as Google specifically states that the query suggestions are a typical feature unless disabled.4

This inconsistency was first publicized on Fox News’ website.5 According to the article Google explained the unusual behavior to be a very unique bug, but the same article continues to state that no clarification was provided by the company.

Everyone can draw their own conclusions, as not much more needs to be said.