UPDATE3: The Smoking Gun1 has a good article that does a good enough job of convincing us these two guys aren’t it. You judge for yourself.

UPDATE2: According to ABC News2 one of the two previously suspicious appearing individuals identified below has talked to police claiming his innocence.

UPDATE1: According to InfoWars3 the two likely Navy SEALs might be private security from Craft International4.

InfoWars 5 showed its awesomeness yet again by collecting key photographs with basic analysis of the Boston Marathon Bombing. From these pictures we can draw a few conclusions, with the caveat that who knows if the analysis is accurate.

1. Navy SEALs were deployed for security

In the image from InfoWars it appears that two Navy SEALs are providing security near the finish line. The conclusion is based on the BDU-style dress of the individuals, the fact that both are dressed alike, and that one of the persons wears a hat with the SEAL Team logo.

Assuming that the analysis is accurate, it begs the question why SEALs were present. Perhaps they deploy to all similar events. It’s also possible that Boston had some reason to be concerned, perhaps for the same reason that the New York City Marathon was cancelled last year. 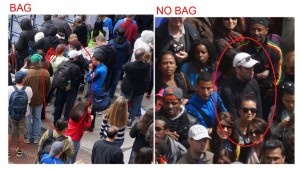 In the meantime, you are free to draw your own conclusions. Also be sure to check out the InfoWars article which made the disclosures in the first place.6

« Elbert Guillory: Why I Am a Republican
A Really Good Comment About Gun Control »