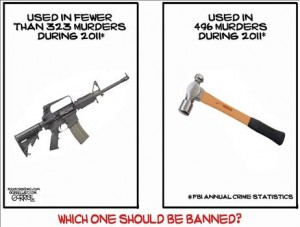 Which one should be banned?

The following gem was in the discussion thread to a DailyMail article about gun control protests on January 19, 2013.1

« InfoWars Identifies Boston Marathon Bombers (OR NOT!) (UPDATED)
Houston Police: “You are videotaping me and I want to know who you are” »