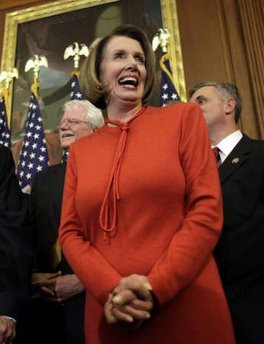 This is the day that Madam Speaker will likely cherish for years to come. Against many odds she was able to pass the healthcare act that some were saying might be delayed into next year, or might not be passed at all.

It’s a significant achievement, even in a setting where the Democrats have solid majorities in both the House and Senate. It certainly wasn’t easy, as attested by the fact that 39 Democrat Congressmen voted against the bill, and that it passed with a bare minimum of 220 to 215.

But what does the passing of this bill really mean?

Take out the Congressional credit card…

We can — and surely will — argue the merits of the likelier-than-ever to be healthcare law ad nauseam. For now suffice to say, perhaps the biggest hurdle of the law is its cost.

The projections for the cost of the law are at $900 billion at the low side, to $1,200 billion at the high. This cost includes a shift of $500 billion in Medicare funds, that are assumed to be “saved”, some or all of which will drop to the bottom line should the “savings” not be realized.

Large Congressional bills seem to almost universally come with a fudge factor that goes unstated at the time of passage, but reflects the real cost of the program as the years go by. This factor was about 3 for Medicare, i.e. the bill cost almost 3 times as much as originally believed. For military hardware it’s seemingly never less than 2. One could dig deep and find the full range of fudge factors, but it would be very surprising if there ever was a negative one.

Where does that money come from? It isn’t new taxes, because that’s already factored into the $1,200 billion figure. Without the 2.5% healthcare fee on everyone, and the new 5% tax on individuals making more than $500,000 the stated cost of the act would have been much higher.

It also isn’t discretionary funds that Congress has stashed away for projects such like this one, as Congress already spends 30% more than it takes in.

It seems that paying for the program was not on the mind of Congress as the bill was passed.

Previous estimates of the budget deficit Congress is already projecting to overspend its income by some $1,000 billion a year for the next 10 years. That number just jumped by 15-30%, depending on how accurate the projections of the cost of the bill were.

« How does the budget deficit get paid for?